11 Days/ 10 Nights
Enjoy the beauty and historical past of Delhi, Agra, Jaipur, Jaipur and Udaipur. 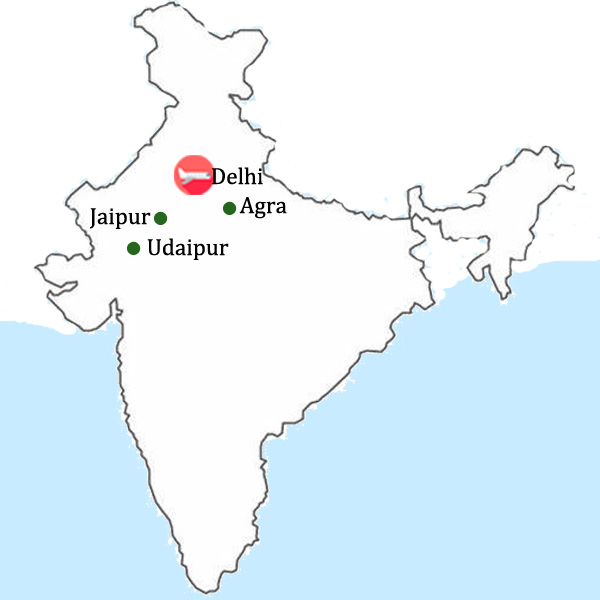 Detailed Itinerary
Day 1 Arrival Delhi
Mystery, magic, mayhem. Welcome to Delhi, City of Djinns, and 25 million people. Like an eastern Rome, India’s capital is littered with the relics of lost empires. A succession of armies stormed across the Indo-Gangetic plain and imprinted their identity onto the vanquished city, before vanishing into rubble and ruin like the conquerors who preceded them. Modern Delhi is a chaotic tapestry of medieval fortifications, Mughal mausoleums, dusty bazaars, colonial-era town planning, and mega malls.
Upon arrival at Delhi International airport you will be provided assistance followed by transfer to hotel. On arrival at the hotel, you will be welcomed traditionally with Arti and Tikka (a Hindu Ritual where young women puts a vermillion mark on your forehead welcomes you with a platter of auspicious items). This will remark as an auspicious start to your journey to India. Post this ritual, you will be provided with a non-alcoholic beverage and keys shall be handed over to you and relax at your rooms. Stay 3 nights at the Claridges hotel or similar.


Day 02 Delhi - City Tour
After breakfast, meet our staff (around 1200 hrs) who will brief you about your trip and shall handover all the travel documents to you. They will answer all your queries and shall also introduce you to your Tour Director. After the tour briefing you can start your city tour of Old Delhi.
The tour shall take you to the Old Delhi where you shall visit the Jama Masjid, Shah Jahan’s last architectural extravagance, the Jama Masjid towers over Old Delhi and is India’s largest mosque. The massive courtyard of the Jama Masjid can hold up to twenty-five thousand worshippers and houses many interesting relics, including an ancient copy of the Quran inscribed on deerskin as well as the relics of Prophet Muhammad, such as a red hair from his beard, his sandals and his footprint imprinted on a marble slab.
From there, take a rickshaw and ride through the narrow lanes of old colorful markets bustling with action-packed streets. We will take you to Kinari Bazaar as well as the beautiful and interesting spice market, an old bazaar of Delhi. Here you will experience the beautiful art of Indian Bridal wear making and lanes of Chandni Chowk, through that Delhi traffic in an e-rickshaw. Then drive towards The Red Fort for a quick photo stop from outside.
The Red Fort- A UNESCO World Heritage Site; a massive red sandstone fort that is octagonal in design with the walls covered with beautiful flower decorations and calligraphy. It is a proof of the glory of the flourishing Mughal Empire in Delhi.
After the visits, return to the hotel and rest of the evening is free to relax at your hotel.
Day 03 Delhi - City Tour
After breakfast, Later drive to the New Delhi which feels like a different city altogether.
Visit Qutub Minar. World’s highest building made of bricks of about 73 meters of height. The Qutub Minar was built by Qutub-ud-Din Aibak in 1193 as a part of a celebration of Muslim dominance in Delhi after the defeat of Delhi’s last Hindu ruler.
Later, drive past India Gate, - it is war memorial dedicated to the troops of British India, who died in the wars of 1914 and 1919. It is located eastern end if the Rajpath – a formerly known as the Kingsway is about 138 feet in height. You will also drive pass through the Government Building lining the Janpath area on your way to Gurudwara Bangla Sahib, a famous Sikh Temple is one of the most prominent Sikh Gurudwara, or Sikh house of worship inside its complex.
You can volunteer at the community kitchen if you wish.
Later after visit, ladies can get their hands painted with the henna from the famous market near Hanuman Mandir. (Henna is a form of body art in which decorative designs are created on a person's hand using a paste, created from the powdered dry leaves of the henna plant. It’s a temporary design and will fade away slowly).
Have a mesmerizing lunch at a South East Asian cuisine restaurant ‘Spice Routes’ – one of the top-rated restaurants of India.
After visits & lunch, return to the hotel and rest of the evening is free to relax at the hotel.
Day 04 Delhi / Agra (145 Miles / 4 Hrs. Approx.)
After breakfast, check out from hotel and drive to Agra. Upon arrival, check in to the hotel.
Rest of the day is free to relax at the hotel.
Hi-tea at the hotel with the view of the beautiful Taj. After having tea, rest of the evening is free to enjoy the
Stay 2 nights at the Trident Agra Hotel or similar.
Day 05 Agra / City Tour
Home of the world-famous Taj Mahal, Agra is one of India’s prime tourist destinations for specifically this reason, though its attractions also extend to an array of other impressive historical sights. These include the red-hued Agra Fort, the sacred Jama Masjid mosque. The Taj, however, is in a league of its own and needless to say is a must-see for any visitor to the city. Commissioned by the Mughal emperor Shah Jahan in the 15th century as a memorial to his beloved wife Mumtaz Mahal, it is an architectural masterpiece of exquisite craftsmanship and perfect proportions.

Day 09 Udaipur / City Tour
Dubbed the ‘Venice of the East’, the city of Udaipur is built around three interconnected lakes – Lake Pichola, Fateh Sagar Lake and the smaller Swaroop Sagar Lake – and encircled by the hills of the Aravalli mountain range. It is home to an array of ancient temples and fairy-tale palaces (several of the latter have been converted into luxury heritage hotels) and is known as one of Rajasthan’s most beautiful and romantic cities.
You can indulge in morning yoga session at the hotel (organised by the hotel for all the in-house guests, also do check the timings at the hotel).
After breakfast, start your day with the visit of Jagdish Temple, later walk through the alleyways and see the people living their time here.
You will see homes of Merchants, Warrior Communities, and Priest communities etc., Craftsmen making a bronze base for steel utensils, Spice Market, Sreenath Ji (Lord Krishna Temple), Wholesale Vegetable Market and Bridal Wear Market.
Visit Maharana’s City Palace you will be Surmounted by balconies, towers and cupolas towering over the lake, the imposing City Palace is Rajasthan’s largest palace, with a facade 244m long and 30.4m high. Construction was begun in 1599 by Maharana Udai Singh II, the city’s founder, and it later became a conglomeration of structures (including 11 separate smaller palaces) built and extended by various Maharanas, though it still manages to retain a surprising uniformity of design.
Later visit The Sahelion ki Bari lies in the north of the city, about 3km from Lal Ghat, the Saheliyon-ki-Bari was built by Sangram Singh II in 1710. This small, quaint ornamental garden was laid out for the enjoyment of 48 women attendants who came as part of a princess’ dowry and has beautiful, well-maintained fountains (water shortages permitting), kiosks, marble elephants and a delightful lotus pool.
After visit, you will spend day exploring the city by visiting the local market.
Later in the afternoon enjoy an Exclusive boat ride on Lake Pichola and visit to the Jag Mandir.
The first island palace of Lake Pichola, Jag Mandir was built by Maharana Karan Singhji in 1622 AD and was intended to be a pleasure palace for regal parties and functions. It has served as a refuge for Mughal Emperor Shahjahan when he was a prince against the wrath of his father in a family dispute in the seventeenth century. The legend says that Jagmandir was the inspiration behind the world-famous Taj Mahal, which Shah Jahan built in the memory of his deceased wife, Mumtaj.
After visiting the city, return to your hotel.
Day 10 Udaipur -> Delhi (FLIGHT)
After breakfast, morning is free. Later you will be provided assisted departure transfer to Udaipur airport to connect the flight for Delhi. Assistance upon arrival at Delhi airport followed by transfer to hotel. Upon arrival, check into the hotel.
Later in evening you have visit of Kingdom of Dreams Theatre (Gold Class). The ultimate entertainment and leisure destination, sprawling across acres of land, located at Gurugram, is the magnificent Kingdom of Dreams. Here, the carnival that is India is distilled into one iconic destination. This fabulous Kingdom brings to life a blend of India's art, culture, heritage, craft, cuisine and performing art... All with the technological wizardry of today. Watch and enjoy the Bollywood musical show in Gurugram (New Delhi Suburbs and near to the airport) in the evening at the Kingdom of Dreams (www.kingdomofdreams.in) The show is for 02 Hrs. Approx. and starts at about 1930 Hrs. (Closed on Every Monday, Pls note that show timings change in between. We can confirm the exact timings closer to the dates)
Return to hotel. Overnight stay at Trident Gurugram hotel or similar.
Day 11 Delhi Departure
After breakfast, you will be provided in time assisted departure transfer to Delhi International airport to connect the flight for onwards journey.

Tour Prices from:  sharing twin or double room including daily breakfast
GBP 3,250.00 per person
USD 4,200 per person
EUR 3,800.00 per person
**Above tour price excludes internal airfares mentioned in the tour itinerary.
TOUR PRICE INCLUDES:
TOUR PRICE EXCLUDES:
THE ABOVE PRICE IS NOT VALID FROM DECEMBER 21ST, 2019 TILL JANUARY 10TH, 2020 AND BECAUSE THERE WILL BE MANDATORY PEAK SEASON SUPPLEMENTS WHICH WILL BE PAID BY THE CLIENTS EXTRA AND IS AVAILABLE ON REQUEST. THERE WILL BE MANDATORY CHRISTMAS DECEMBER 24TH, 2019 AND NEW YEAR’S DECEMBER 31ST, 2019 EVE GALA DINNER SUPPLEMENT.

Let us help you to plan your Dream Vacation!

The Princesses Trails - The Indian Journey

With care and attention to detail we give you exactly what your sense of ‘wanderlust’ is looking for, so don’t let anything hold you back from taking that first leap in satisfying the explorer and adventurer in you!

We use cookies to ensure that we give you the best experience on our website.
I accept